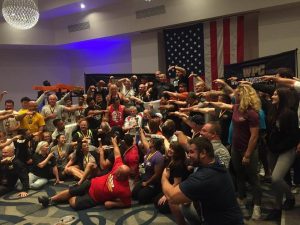 So we are just back form the 2018 WPC World Championships in Orlando Florida and with a hoard of medals! Team GB set upon the USA with brute force and a fair bit of ignorance to bring the stiff upper British lip to Orlando and some very resolute performances.

The team, made up of 23 lifters from Teens to M5 made it to one of the best venues we have seen at WPC Worlds in some time and the organisation was outstanding. A very posh venue indeed and tonnes of room with the usual Elite equipment as well. The Whatsapp Group was buzzing, the lifters were doing a bit of arm waving and the whole team was firmly behind one another and you cant ask for more than that. I am pretty sure that among WPC World records that the team took there were many personal bests achieved and I do also know that a few of our team had to overcome circumstances prior to coming out to the worlds, and during, that would have flattened most of us.

Something I did notice was the positive approach so many of the team had before and during the competition. International events can be terrifying and if you are right on the edge with your numbers and going for something never attempted by a Brit before, the risks can be huge. I made a post while we were out there about how proud I was of the team and how hard they had worked and also made a point about the big fish small pond syndrome. What sparked this was a post that appeared and then disappeared on Facebook, the usual “youre not a real world champion as there are so many federations” nonsense which appears every year from some disgruntled person who usually has competed much outside the country if at all.

The point I want to raise is that many of us at some or another know we are going out to international to meet our fate so to speak. That what we lift is probably not going to win us a medal but we want to compete anyway and give everything we have got. Others also know that there is a high possibility, like myself, that you are having to take a risk to hit numbers which havnt been attempted before and the possibility is you will bomb – but you still do it. Even if you end up in a class on your own, the fact is that you will have had to fight for your place to be there through the British, you will still have trained to improve and up your numbers and keep fighting to improve – with the potential of being hammered at the competition. None of us know what will happen but we go anyway to set foot on platform at world level.

Now a phenomena which seems to have been appearing in the UK is this holier than though thing from people who have only been around a few years, not only think they are now a guru on the sport, but also they are in a position to criticise others and other federations publicly. Not only is this really “not cricket old chap” it is frankly a fundamental undermining of those people who have earned the right to compete and regardless of their level will be risking everything to fly off to do it. The UK on a whole is really very small, so these “superstars” in the little isle of GB, once on the international circuit where they dont go usually dont fare so well. The real superstars are the ones who are lifting internationally comparable weights BUT who have the humility and professionalism to support everyone, support the sport and also encourage people who are on the ladder no matter whether they do it for fun or a focused goal.

Every person who lifted at the WPC World Championships was there for every other team member. Every one of the people on the team offered to help others. Every one of our British Team screamed and shouted for everyone else on the days they could be there. I am immensely proud of all our competitors and the damn hard work they put into not only getting there, but also pushing to improve and compete. Below is a list of our GB Team – please give them some love!!

Welcome to the home of the BPU & ABPU